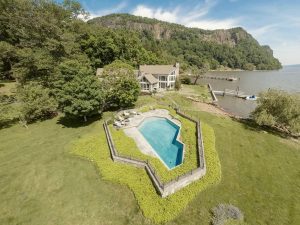 The luxurious estate at 641 N. Broadway, one of the largest privately owned parcels on the west bank of the Hudson, represents the third-highest selling price recorded by the Hudson Gateway Multiple Listing Service for all of Rockland County and the highest selling price recorded by the service since 2013, when Ellis Sotheby’s sold neighboring 649 N. Broadway, Upper Nyack, for $6.2 million.

“Upper Nyack, Nyack and South Nyack on the Hudson River are strongholds for estate properties selling at peak prices,” said Richard Ellis, owner of Nyack-based Ellis Sotheby’s International Realty, which also listed and sold the home of comedian, actress and TV personality Rosie O’Donnell for $5.1 million in South Nyack in 2018.

“Ellis Sotheby’s International Realty has sold the highest-price homes in Rockland County during 12 of the last 13 years,” he said. “This sale gives us confidence in the 2019 luxury market. In the last 10 days, we’ve seen more properties over $1 million dollars being shown and several offers made.”

Just 40 minutes from New York City, 641 N. Broadway occupies 723 feet of shoreline in a private setting that was a sandstone quarry during the 1800s. The home offers spectacular vistas of the river as well as Hook Mountain and features 30-foot ceilings with glass walls, antique barn beams and blue stone floors.

The five-bedroom, three-and-a-half bath home also includes a spacious master bedroom suite that opens to the Hudson River and a rear yard that also faces the water. Amenities include a dock, in-ground pool and sandy beach.

Local artist Edward Hopper, widely acknowledged as one of the most important painters of 20th century America, painted the view from the home, and the British came on shore and fired their cannons there during the Revolutionary War, as documented in a letter to George Washington. “A cannonball was found at the property – truly a trophy home,” said Ellis.